By Thomas L. Friedman
Opinion Columnist
阅读简体中文版閱讀繁體中文版
Sign up for the Opinion Today newsletter Get expert analysis of the news and a guide to the big ideas shaping the world every weekday morning. Get it sent to your inbox.
You can hold off moving to Canada. You can forgo the call to the New Zealand Embassy on how to become a citizen there. Tuesday’s election really was the most important test since the Civil War of whether the engine of our constitutional system — our ability to peacefully and legitimately transfer power — remains intact. And it looks to have come through — a little dinged up, but OK.
I am still not even close to ready to sound the all-clear, to declare that running on a platform of election denialism will never tempt another American politician. But given the unprecedented degree to which election denialism was elevated in this midterm and the way several big-name Trump-imitating knuckleheads who made denialism central to their campaigns got their clocks cleaned —- we may have just dodged one of the biggest arrows ever aimed at the heart of our democracy.
To be sure, another arrow could target us at any moment, but the whole U.S. electoral system — in red states and blue — seemed to perform admirably, almost shrugging off the last two years of controversy, diminishing it to what it always was: the shameful fabrication of one man and his most shameless sycophants and imitators. Given the threat posed by Trump denialists to the acceptance and legitimacy of our elections, that is a big deal (and hopefully it will last through the Arizona count).
It could not come at a better time as the leaders of both Russia and China have manipulated their systems to entrench themselves in power beyond their previously established terms of office.
Advertisement
Continue reading the main story


One of their arguments to their own people in doing so was to point to things like the Jan. 6, 2021, insurrection in America and the seeming chaos of our elections to tell their citizens: “That’s what democracy looks like. Is that what you want here?”
Indeed, in May, during his commencement address to the U.S. Naval Academy’s graduating class, President Biden recalled when President Xi Jinping of China congratulated him in 2020 on his election: “He said democracies cannot be sustained in the 21st century; autocracies will run the world. Why? Things are changing so rapidly. Democracies require consensus, and it takes time, and you don’t have the time.”
For that reason, both Xi and Russia’s president, Vladimir Putin — and the supreme leader in Iran now facing an uprising led by Iranian women — lost on Tuesday night, too. Because the more wild and unstable our politics, the less able we become to peacefully transfer power, the easier it is for them to justify never doing so.
But while election denialism took a thumping this week as a winning message, none of the things that are still eating away at the foundations of American democracy — and preventing us from actually getting big hard things done — have gone away.
I am talking about the way in which our primary system, gerrymandering and social networks have coalesced to steadily poison our national dialogue, steadily polarize our society into political tribes and steadily erode the twin pillars of our democracy: truth and trust.

Without being able to agree on what is true, we don’t know which way to go. And without being able to trust one another, we can’t head there together. And everything big and hard needs to be done together.
So, our enemies would be wise not to leave us for dead, but we would be even wiser not to conclude that, because we avoided the worst, we’ve locked in the best going forward.
Everything is not all right.
We are as divided coming out of this election as we were going into it. But to the extent that the red wave did not manifest itself — particularly in swing states like Pennsylvania, where John Fetterman won a Senate seat over the Trump-endorsed Dr. Oz, and in swing districts like one in central Virginia where Democratic Representative Abigail Spanberger was re-elected by defeating another Trump-backed candidate — it was because enough independents and moderate Republicans and Democrats showed up to put Fetterman and Spanberger over the top.
“There is still a viable group of centrist voters out there, who, when given a valid choice — not everywhere, and not always, but in some key districts — asserted themselves,” Don Baer, who was a communications director in the Clinton White House, told me. “I think there are still a lot of voters saying: ‘We want a viable center, where we can figure out how to make things happen that can really help people, even if it isn’t perfect or all at once. We don’t want every election to be existential.’”
The challenge, added Baer, “is, how do you take that sentiment to scale and make it work in Washington on a regular basis?”
I don’t know, but, if this election is a sign that we are at least edging back from the brink, it’s because enough Americans still fall into this independent or centrist camp and do not want to keep dwelling on the grievances, lies and fantasies of Donald Trump, which they can see are making the G.O.P. crazy and roiling the whole country. They also don’t want to be shackled by the woke enforcers of the far left, and they are terrified by the spread of the kind of sick political violence that was just visited on Nancy Pelosi’s husband.
We owe a huge debt for keeping this center alive to Republican Representatives Liz Cheney and Adam Kinzinger and Democratic Representative Elaine Luria. The three of them helped to spearhead the Jan. 6 investigation in Congress and ended up being forced out of office as a result. But the message that committee sent to enough voters — that we must never, ever, ever let something like this happen again — surely also contributed to the absence of a pro-Trump wave in this midterm election.
Advertisement
Continue reading the main story


In sum, we did not get a clean bill of health. We got a diagnosis that our political white blood cells did OK in beating back the metastasizing infection that threatened to kill our whole electoral system. But that infection is still here, which is why the doctor advised, “Behave in healthy ways, build back your strength and return in 24 months for another scan.” 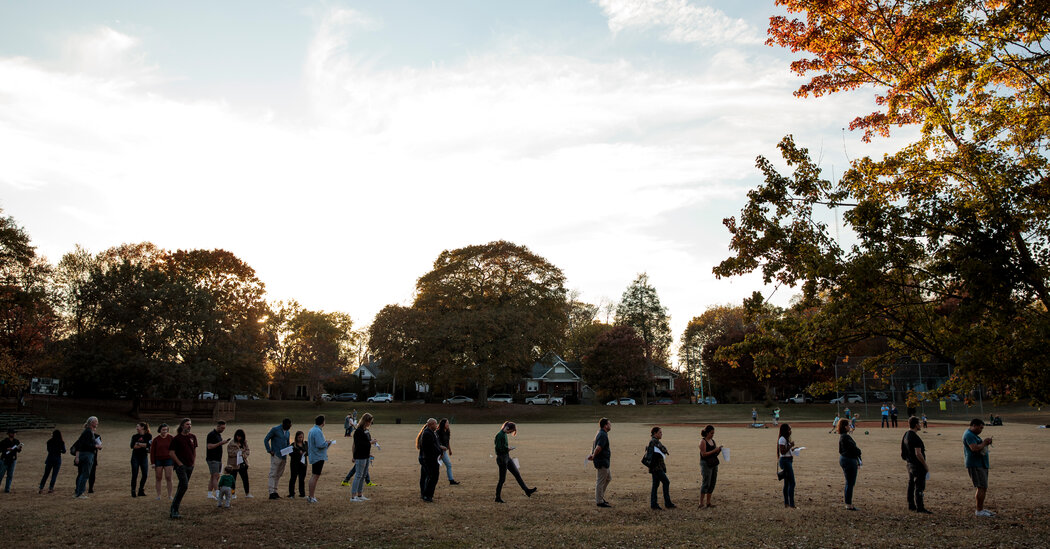 Democracy survived the midterms, but we’re far from safe.

, if this election is a sign that we are at least edging back from the brink, it’s because enough Americans still fall into this independent or centrist camp and do not want to keep dwelling on the grievances, lies and fantasies of Donald Trump, which they can see are making the G.O.P. crazy and roiling the whole country. They also don’t want to be shackled by the woke enforcers of the far left,

if this is true -- ie there are a good number of independent/centrist types unwilling to get jerked around by extremists of either hue, we'll do fine regardless of which political persuasion rules. as it should be. hope the diagnosis in the article is a good one.
Reactions: cigaretteman
You must log in or register to reply here.

Donald Trump Isn’t the Only One to Blame for the Capitol Riot. I’d Know.

Off Topic Wednesday at 10:11 AM
cigaretteman

Off Topic Thursday at 9:13 AM
Joes Place

Off Topic Tuesday at 3:09 PM
BelemNole