By Neal K. Katyal
Mr. Katyal is a professor at Georgetown University Law Center, was an acting solicitor general in the Obama administration and is a co-author of “Impeach: The Case Against Donald Trump.”
The memo released last week by the Justice Department closing the book on the report of Special Counsel Robert Mueller and his inquiry into Russian interference in the 2016 election is a frightening document. Critics have rightly focused on its substance, slipshod legal analysis and omission of damning facts.
But the process by which that memo, sent in March 2019, came to be is just as worrisome. Delivered to the attorney general at the time, Bill Barr, the memo was written by two political appointees in the Justice Department.
Mr. Barr used the memo to go around the special counsel regulations and to clear President Donald Trump of obstruction of justice. If left to fester, this decision will have pernicious consequences for investigations of future high-level wrongdoing.
Advertisement
Continue reading the main story


It raises particular concerns because, as a young Justice Department staff member, I drafted the special counsel regulations in 1999 to prevent the exact problem of having partisan political appointees undermine an investigation. The regulations were put in place to ensure that the counsel would make any determination to charge or not and to force the attorney general to overrule those determinations specifically and before Congress.

The 2019 memo tendentiously argued that Mr. Trump committed no crimes — leaving the final decision on the matter to Republican-aligned appointees instead of to the independent special counsel.
The challenge in devising the regulations was to develop a framework for the prosecution of high-level executive branch officials — which is harder than it sounds, because the Constitution requires the executive branch to control prosecutions. So we are left with one of the oldest philosophical problems: Who will guard the guardians?
The solution we landed on was to have a special counsel take over the investigative and prosecutorial functions. That counsel was vested with day-to-day independence in an investigation, but the attorney general would still be able to overrule the special counsel — but, crucially, if the attorney general overruled, to report to Congress, to ensure accountability.
The regulations were written with an untrustworthy president in mind, more so than the problem that Mr. Barr presented, which is an untrustworthy attorney general. Unlike presidents, attorneys general are confirmed by the Senate, with a 60-vote threshold — so we assumed they would be reasonably nonpartisan. And we also knew there was no way around the attorney general being the ultimate decider, because the Constitution requires the executive branch to control prosecutions.

We created the role of special counsel to fill a void — to concentrate in one person responsibility and ultimate blame so that investigations would not be covered up from the get-go and to give that person independence from political pressure.

It is outrageous that Mr. Barr acted so brazenly in the face of this framework. The point of requiring a special counsel was to provide for an independent determination of any potential criminal wrongdoing by Mr. Trump. But the political appointees in his Justice Department took what was the most important part of that inquiry — the decision of whether he committed crimes — and grabbed it for themselves. This was a fundamental betrayal of the special counsel guidelines not for some principle but because it protected their boss, Mr. Trump. It is the precise problem that the regulations were designed to avoid and why the regulations give the counsel “the full power and independent authority to exercise all investigative and prosecutorial functions of any United States attorney.”
Mr. Mueller demurred in making that determination because of a longstanding policy against indicting sitting presidents, reasoning that if he could not formally indict, he then could not say whether Mr. Trump committed crimes. Reasonable minds can disagree with Mr. Mueller’s determination, but the key here is that Mr. Barr thought such a determination could be made.
But instead of doing what the regulations contemplated — namely, tell Mr. Mueller he disagreed and ask him to make that bottom-line determination — Mr. Barr left that intricate determination to two political appointees. He did this in the teeth of a set of regulations that required him to report to Congress if he disagreed with the counsel. Mr. Barr never made such a report and instead, until last week, the memo remained unavailable to the public; a Federal District Court judge recently called the Justice Department’s explanations to keep it secret “disingenuous,” as well as “misleading and incomplete.”
This is a key concern, because America desperately needs an effective system to investigate high-level executive branch wrongdoing. Whether it is a second Trump administration incident or a Biden administration scandal, somewhere, sometime, the executive branch is going to need to investigate itself.
Some people have suggested that we might revisit something like the Independent Counsel Act of 1978, which was structured to mix functions between an outsider and an inside attorney general. But in its actual execution — like the Starr investigation during the Bill Clinton years — it was even worse than the special counsel regulations. By fragmenting decision making, that act allowed the attorney general to blame Congress, for Congress to blame the attorney general, and for the independent counsel to blame both of them, for any controversial prosecutorial steps.
Some people have pointed out that, as Mr. Mueller clearly believed, current policy does not permit the indictment of a sitting president. But that is a flaw not of the special counsel regulations but rather of Department of Justice rules that go back to (not surprisingly) the Nixon administration. I think those rules go too far and that indicting sitting presidents is permissible, even if they may not be tried until they leave office. Still, in a world where a sitting presidents cannot be indicted (or tried) until they leave office, there is a need for a functioning apparatus to allow for the investigation and bottom-line criminality determinations to be made, both to tee up a possible criminal trial and for possible impeachment proceedings.
Advertisement
Continue reading the main story

What Mr. Barr did must be strongly and swiftly repudiated by Republicans and Democrats alike, because otherwise it will enable attorneys general to sidestep prosecution of not just the president who appointed them but also all those who serve that president.
The regulations can be improved: They should call for earlier congressional notification of significant developments. Instead of requiring attorneys general to report an overrule at the end of an investigation to Congress, a report to Congress (or perhaps a Gang of Eight) could be required very shortly after any important decision. That change would encourage attorneys general to avoid pernicious activity.
It’s no surprise that the Justice Department tried to keep this memo from the light of day. Years later, it packs none of the punch it would have had if it had been released at the time. Yet perhaps that distance provides us with an opportunity to think through the rules and procedures to get it right the next time. 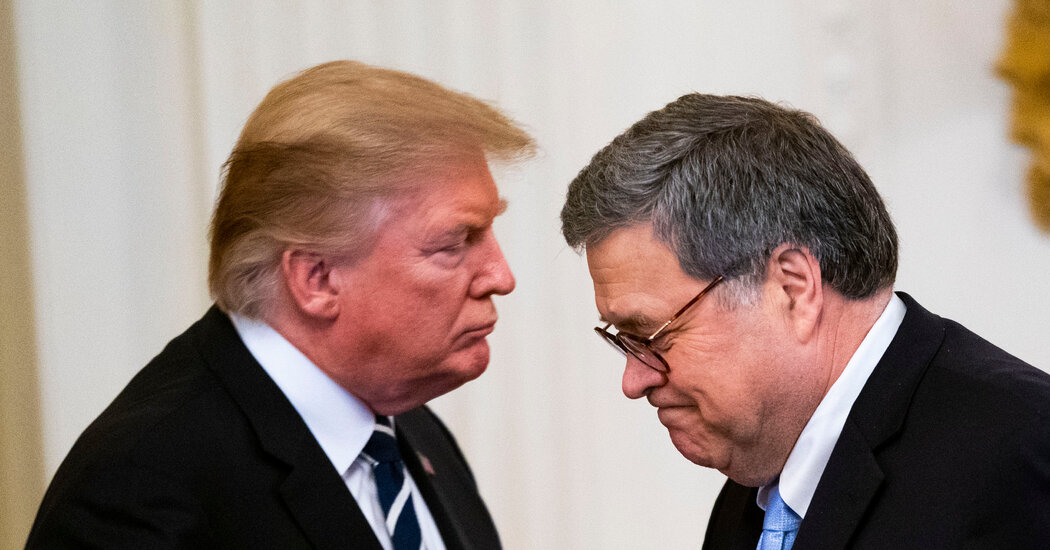 Opinion | Bill Barr Made the Decision to Clear Trump, and That Should Still Frighten Us

The ability to investigate future high-level wrongdoing in the executive branch is at stake.