Was "The Flood" (i.e. the one Noah allegedly bested) real?

Rifler said:
No, they did not all read the same book...
Click to expand...

Here's a poser - if the Biblical story is remotely accurate - why do any of these cultures have a myth about a world-wide flood, at all? They were completely wiped out...to the last person. There would be no one to record the story.

Rifler said:
My theory is yes, it was real, but it wasn't global,... Just a large area that was perceived to be the entire world as the current inhabitants knew it...
Click to expand...

Did it kill every living creature except for a handful?

Because, you know, if there was just a big, local flood that really isn't even related to the biblical flood story.

alaskanseminole said:
I figure if you want to believe it, you can google all the evidence you need to maintain said belief.

If you want to not believe it, you can equally google all the evidence you need to maintain disbelief.
Click to expand...

The same can be said of any silly claim. You seem to be suggesting there is no reason to weigh evidence on anything and just believe what you want.

There are positions on subjects that are more defensible than others.
Reactions: cigaretteman

I asked a nun this very question while in catholic school. She told me no, that it was a parable designed to teach a lesson.
A moment of true honesty.
Reactions: tarheelbybirth and cigaretteman

tarheelbybirth said:
And - guess what - the Egyptians have no world-ending flood myth. How did they miss it? They do have a story of a terrible flood unleashed by Ra that destroyed their crops and caused mass death. Do you suppose there was ever a year where that was massive rainfall in the Nile river basin that led to the Nile inundating areas downriver that didn't flood every year - the areas where they grew their crops?
Click to expand...

The Egyptian flood narrative speaks to “starting the human race anew” with Toth as its hero and yes, a boat is involved. It’s interesting to say the least:

tarheelbybirth said:
Here's a poser - if the Biblical story is remotely accurate - why do any of these cultures have a myth about a world-wide flood, at all? They were completely wiped out...to the last person. There would be no one to record the story.

Except they weren’t all wiped out. Noah’s three sons survived and the Bible records all of civilization today can be traced back through each of their bloodlines.

No. And anyone saying otherwise is trying to sell you something.

Bonerfarts said:
Floods are real. Boats that hold the entirety of Earth's living organisms in pairs is not.
Click to expand...

This....it was the flooding of the Black Sea as sea-level stabilized following the last glacial stage. 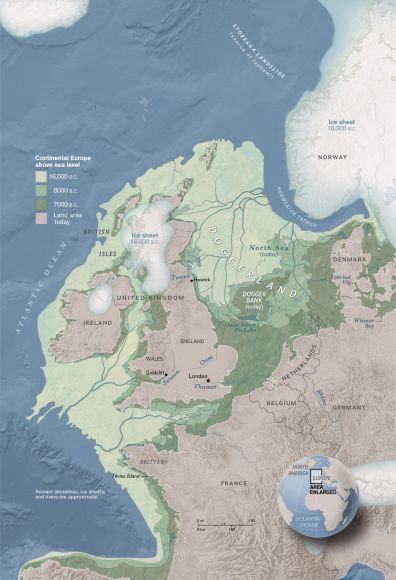 Pinehawk said:
I asked a nun this very question while in catholic school. She told me no, that it was a parable designed to teach a lesson.
A moment of true honesty.
Click to expand...

Unless on today's lesson something needs to be interpreted literally to enforce an agenda.

But you are right, she gave you a moment of honesty.
Reactions: artradley

At the end of the last ice age, Britain formed the northwest corner of an icy continent. Warming climate exposed a vast continental shelf for humans to inhabit. Further warming and rising seas gradually flooded low-lying lands. Some 8,200 years ago, a catastrophic release of water from a North American glacial lake and a tsunami from a submarine landslide off Norway inundated whatever remained of Doggerland.
Reactions: fsu1jreed

LuciousBDragon said:
The Egyptian flood narrative speaks to “starting the human race anew” with Toth as its hero and yes, a boat is involved. It’s interesting to say the least:

No idea what the provenance of that story is but it apears to be made up. Their link is to a Biblical site - not an academic one.

Here's The Book of the Heavenly Cow directly from Egypt's mouth compiled from heiroglyphs found in multiple Egyptian tombs. It's a pretty good story:

Now his Majesty had learned about the plot divised against him by mankind. Then his Majesty, life, prosperity, health, said to those who were in his retinue :

"Summon to me my Eye, Shu, Tefnut, Geb, and Nut as well as the fathers and mothers who were with me when I was in Nun, and also the god Nun, bringing his courtiers along with him. (But) bring them secretly, lest mankind see and their hearts flee. Come with them to the Great Palace, so that they may give their council. (For) in the end, I may return to Nun, to the place where I came into being !"

So these gods were brought, and these gods were lined up on his two sides, bowing their heads toward the ground before his Majesty, in order that he might speak his words in front of the father of the eldest (gods), the maker of mankind and king of commoners.

Then Ra said to Nun :
"O eldest god in whom I came into being, and You ancestral gods ! Behold, mankind, who came into being from my Eye, is plotting against me. Tell me what You would do about this, since I am searching. I seek not to slay them before having heard what You might have to say."

The Majesty of Nun replied :
"O my son Re ! God greater than his maker, and more august than his creators, be seated on your throne ! Great is fear of You when your Eye is on those who conspire against You !"

The Majesty of Re said :
"See, they have fled into the desert, their hearts being afraid that I speak to them."

(And so) this goddess returned after slaying mankind in the desert, and the Majesty of this god said (to her)

"Welcome in peace, Hathor, Eye who did what I came for !"

Said the goddess :
"As You live for me, I have overpowered mankind, and it was balm to my heart."

Then the Majesty of Re said :
"I shall have power over them as king !
Hold off diminishing their number !" [Yeah, Ra tells her to back the fvck off]

And so the Powerful One (Sekhmet) came into being. [Sekhmet is Hathor's blood-thirsty alter-ego and she goes back to killing people]

Ra said :
"Summon to me speedy messengers who run like a body's shadow."

These messengers were brought immediately, and the Majesty of this god said :

"Run up to Yebu and fetch me red ocher in great quantity !"

So this red ocher was brought to him, and the Majesty of this great god ordered the Side-Lock Wearer in On to grind this red ocher, while maidservants crushed barley for beer. Then the red ocher was added to the beer-mash, and it looked like the blood of men ; seven thousand jars of beer were made. Then the Majesty of the King of Upper and Lower Egypt, Ra came together with the gods to see this beer.

And when the Earth was light for the killing of mankind by this goddess in her time of traveling South, the Majesty of Re said :

Ra said :
"Carry it to the place where she plans to slay mankind."

Ra, the Majesty of the King of Upper and Lower Egypt, got up early when it was still night in order to have this sleeping draught poured out. Then the fields were flooded three palms high with the liquid by the might of the Majesty of this god. When the goddess set out in the morning, she found these (fields) inundated, and her face was delighted by it. She drank and it pleased her heart. She returned drunk and failed to recognize mankind. [Sekhmet becomes Hathor again when she wakes up]

The Majesty of Ra said to this goddess :
"Welcome in peace ! O Beautiful One !


The flood in the story SAVES mankind from the wrath of Sekhmet which is perfectly in keeping with the Egyptian tradition of viewing floods as sustaining them.
F

Because it is allegorical for washing away evil or sins.
Reactions: fsu1jreed
You must log in or register to reply here.

Parts of Greenland now hotter than at any time in the past 1,000 years, scientists say

One method to a long life “The Blue Zones American Kitchen: 100 Recipes to Live to 100.”

Off Topic Sunday at 8:50 AM
pablow

The last eight years have been the warmest on record, researchers say

Off Topic Yesterday at 12:52 PM
BelemNole

Off Topic Tuesday at 10:39 PM
Urohawk