The recruiting floodgates have officially opened for the Iowa women's wrestling program.

"I am excited to announce that I have decided to further continue my academic and athletic career at the University of Iowa," Larramendy wrote in an Instagram post, announcing her commitment.

"I want to thank all my supporters," she continued, "especially my family, Kennedy and Korina Blades, Saul Pulido, my coaches Erin and Chad Vandiver, and Izzy Martinez. And my Lord and Savior Jesus Christ. I'm excited to continue to work and build toward my goals as a Hawkeye."

Larramendy, a senior originally from Reno, Nevada, who now attends Wyoming Seminary in Pennsylvania, is considered the No. 19 pound-for-pound women's high school wrestler in America, according to USA Wrestling. She is also ranked No. 1 nationally at 144 pounds, and has a résumé to back that up.

Even more, Larramendy is just the latest Wyoming Seminary wrestler to commit to the Hawkeyes. Two others, Kolby Franklin and Gabe Arnold, both committed to the men's wrestling program. Franklin, a 2022 signee, has since relocated to Iowa City. Arnold will join the Hawkeyes as part of their 2023 recruiting class. 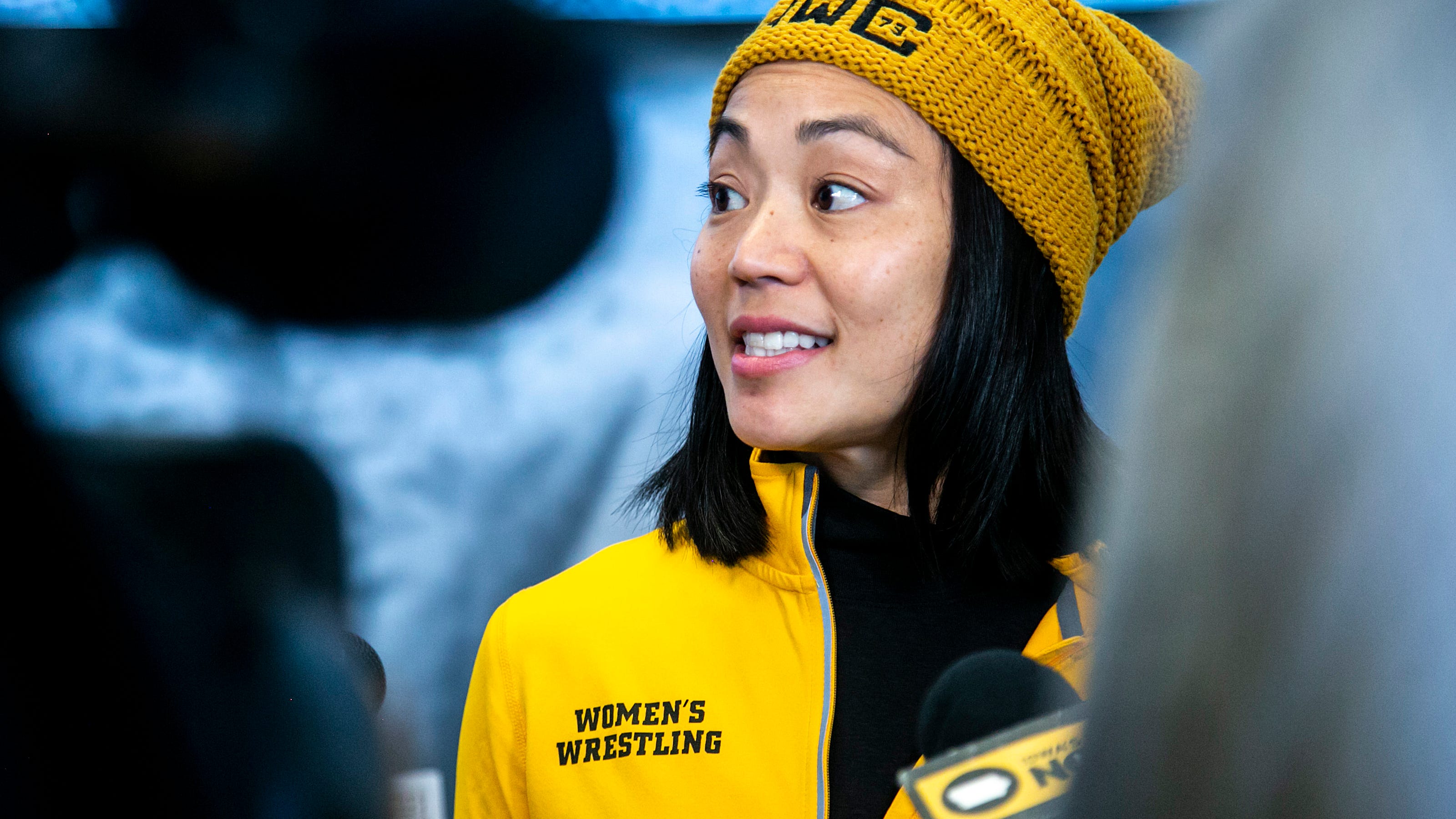 The recruiting floodgates have officially opened for the Iowa women's wrestling program.
www.press-citizen.com
Reactions: HawkeyeEmpire, Joes Place, Kozisek and 2 others

Looks like Iowa will be dominating in both men's and women's wrestling.
Reactions: GOHOX69 and ichawkeye

Last month, Clarissa Chun stood inside Xtream Arena in Coralville for the 2022 Iowa girls state wrestling championships, and she quickly noticed and appreciated the rising talent level from girls all over the state.

“It’s totally Iowa style in here,” said Chun, the head coach of the Iowa women's wrestling program. “These ladies are gritty and they scrap and they’re tough. I think they take pride in wrestling hard. It’s ingrained in the fabric of Iowa, and it shows here. I love it.”

Chun spent part of that weekend recruiting, and on Saturday, those efforts were rewarded with a massive in-state commitment.

Ella Schmit, a senior from Bettendorf, has committed to the Iowa women’s wrestling team. She is the first in-state wrestler to commit to the program, and joins Kylie Welker, a Junior world champion, as part of the Hawkeyes' 2022 recruiting class.

"I am beyond excited to announce that I will be continuing my academic and athletic career at the University Of Iowa," Schmit wrote in an Instagram post, announcing her decision. "I want to give a shout-out to my amazing coaches, family and supporters that have helped make this possible.

"It is hard to believe my biggest dream as a little girl is coming true. I am pumped to reach my full potential at Iowa and can’t wait to start the journey." 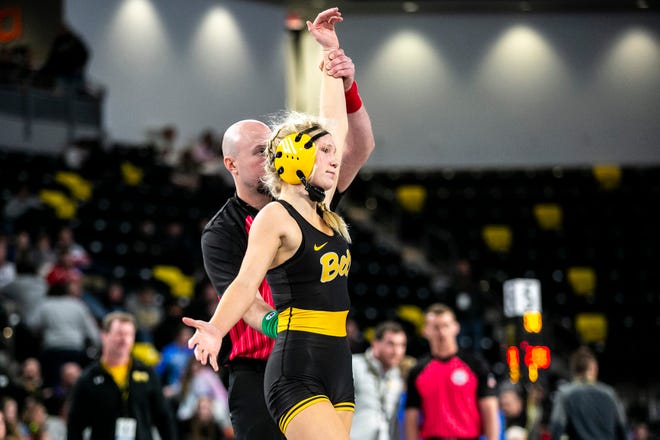 But the Hawkeyes were always the front-runner. Schmit said she’s been an Iowa wrestling fan ever since she started walking. Her family has had season tickets for years, and while sitting inside Carver, she often dreamed of wrestling for Iowa herself.

“I remember sitting there thinking about how cool it would be if Iowa had a women’s wrestling team,” Schmit said back in September, “but it never occurred to me that it could become a reality.”

Another two months later, and Chun has landed commitments from both the nation's top-rated women's wrestling prospect and now Iowa's premier women's high school wrestler in the span of three days.

Schmit is a three-time girls state wrestling champion. She reached the finals at each of the first four girls state championships, hosted by the Iowa Wrestling Coaches and Officials Association. She won twice at 106 pounds, then won at 125 this past season, capping a senior season wherein she went 16-0 with 13 pins.

In 2021, Schmit also qualified for the boys state wrestling tournament, at 106 pounds in Class 3A. She is one of just four girls ever to qualify for the Iowa boys state tournament (the others: Megan Black, twice; Cassy Herkelman; and Jasmine Luedtke). She compiled a career record of 70-18 over the past four years, against both boys and girls.

But even more, by bringing Schmit on board, Chun is getting a bona fide leader to help build the foundation of her program.

Schmit entered her senior year with a few options. She could chase another girls state title while also attempting to qualify for the boys state tournament again, but she instead turned her focus to building her school's girls wrestling program.

Iowa’s statewide girls wrestling participation numbers have erupted over the past six years, from just 67 total girls during the 2015-16 season to 1,023 in 2021-22. That explosive growth led the Iowa Girls High School Athletic Union to formally sanction the sport and begin offering it in the 2022-23 season.

But Bettendorf, a program that’s been among the state’s best — with four traditional team state championships, and another four state runner-up finishes — struggled with recruiting girls. Schmit was the only girl on the roster in 2018-19, one of just two in 2019-20 and one of just five in 2020-21.

Instead of hoping more girls would come out on their own, Schmit stepped in and helped build the Bulldogs' girls program. The results: 24 girls wrestled for Bettendorf this year, and 17 went to the 2022 girls state tournament at Xtream Arena in Coralville. Schmit was one of four medalists that led Bettendorf to a fourth-place team finish.

“Bettendorf’s been known for wrestling for a while, and I thought it was pretty lame that we didn’t have a girls team,” Schmit said at the state tournament. “I’m pretty excited to leave a full team. We have a lot of freshmen, sophomores, juniors, and I’m really excited for them.

“The biggest thing I learned from this whole experience is to be a leader for those who need one.”

Indeed, Bettendorf will have 18 girls return next year for the first IGHSAU-organized girls wrestling season. Schmit deserves a lot of credit for that growth and the success that will soon follow.

Now she’ll take her talents and leadership capabilities to Iowa City to try to do the same thing with Chun and the Hawkeyes. 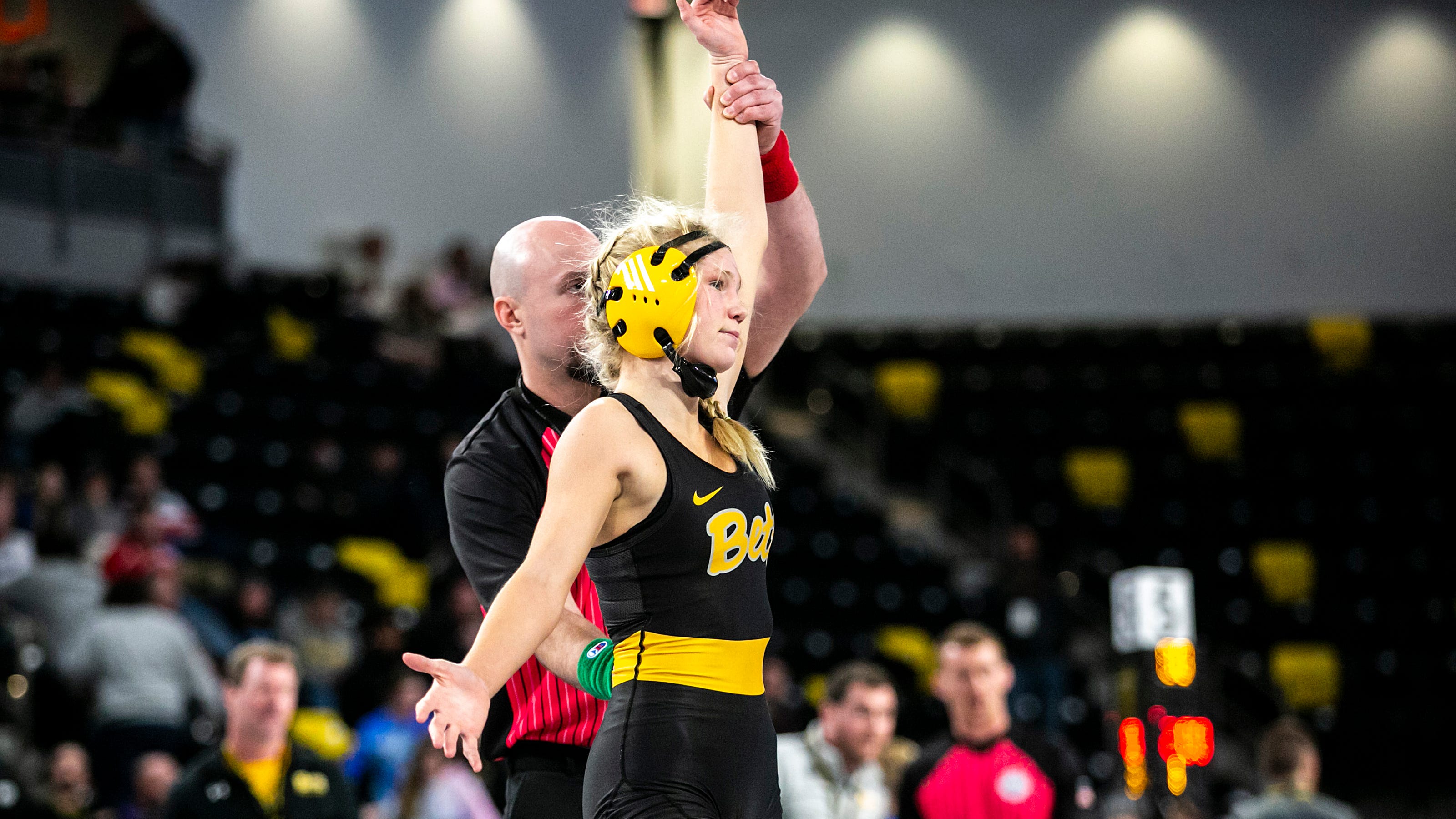 The state's premiere women's high school wrestler announced on Saturday that she plans to be a Hawkeye.
www.press-citizen.com
Reactions: HawkeyeEmpire and Joes Place

Hoosierhawkeye said:
Looks like Iowa will be dominating in both men's and women's wrestling.
Click to expand...

Now they just have to find some other colleges to wrestle against!
Reactions: GOHOX69 and Old_wrestling_fan

Obviously becoming an official team with funding for salaried coaches, facilities and scholarships is the big thing. However, who do they wrestle? Wrestle other college club teams until there are more NCAA sanctioned teams are created?

ThorneStockton said:
Obviously becoming an official team with funding for salaried coaches, facilities and scholarships is the big thing. However, who do they wrestle? Wrestle other college club teams until there are more NCAA sanctioned teams are created?
Click to expand...

Everything you need to know about Iowa's decision to become the first Division I NCAA program to offer a women’s wrestling team.

I would thing that PSU, Okie State, Iowa State, Minnesota and other wrestling schools would want to join the bandwagon. It could be a recruiting advantage for mens wrestling too to have a women's team.

cigaretteman said:
Now they just have to find some other colleges to wrestle against!
Click to expand...

Not a problem. . . still undefeated!

My wife went to the University of North Florida. They are undefeated in football. 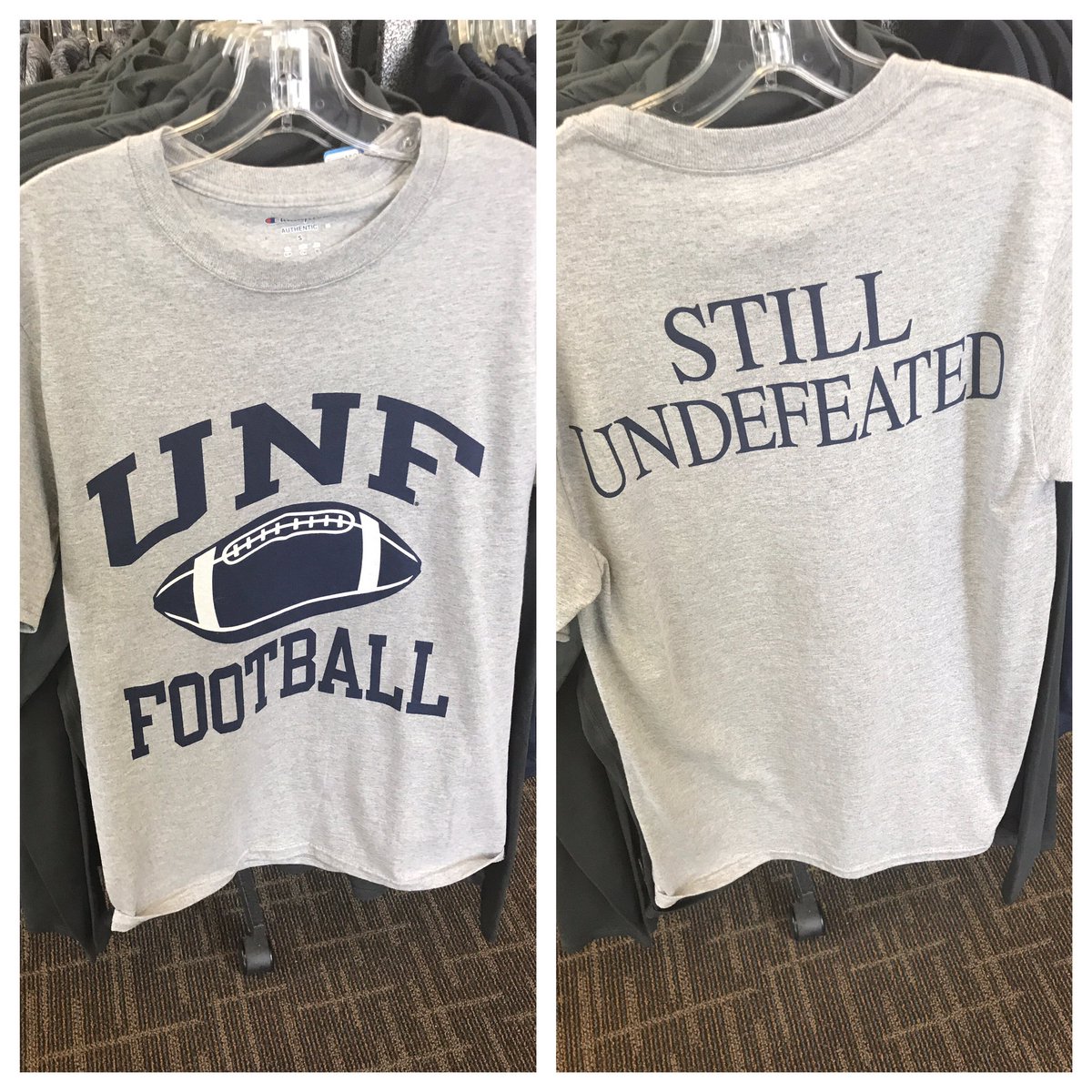 My wife went to the University of North Florida. They are undefeated in football.

cigaretteman said:
I would thing that PSU, Okie State, Iowa State, Minnesota and other wrestling schools would want to join the bandwagon. It could be a recruiting advantage for mens wrestling too to have a women's team.
Click to expand...

I think everyone on your list will add womens' wrestling except ISU. I don't think they will have the funding nor fan support. Minnesota might not because of the strength of girls' hockey in the State.

Hell... they don't draw flies for the mens' program(ISU and Minny).
Reactions: cigaretteman
You must log in or register to reply here.

Women's wrestling is rocking in recruiting