There Is No War On Christmas — But There Is One On Thanksgiving...

As America heads into the third Thanksgiving since the pandemic, a lot of things look like they’re back to normal: Families are gathering around the table together and travel is forecast to be at its highest level in decades. Even the anticipated turkey shortage didn’t materialize, according to the USDA. After three long years of socially distanced holidays, we’re back to merely worrying about whether Cousin Bob and Aunt Kim are going to ruin the feast by shouting at each other about politics. Perhaps we can entice them to debate side dishes instead.

Look closely, though, and there’s one thing that’s strikingly different from how Thanksgiving worked in the long-lost world of November 2019 — and it’s something to be grateful for: A lot of stores will actually close.

Back in the before times, one of the long-festering trends of the fourth weekend of November was the steady encroachment of that bigger holiday scheduled for December. Not long ago, Black Friday didn’t even have a name; by 2019, the signature kickoff event of the Christmas shopping season had bled into Thanksgiving itself.

Thus Walmart, Sears, Dick’s Sporting Goods and Michael’s all announced plans to open with special deals at 6 p.m. on Thanksgiving night of 2019. By that point, Target, Best Buy, Macy’s and Kohl’s would already have been open for an hour. Upping the ante, Old Navy and GameStop opened at 3 p.m., and J.C. Penney unlocked the door at 2. A few big chains dispensed with the holiday altogether: Bass Pro Shops and Cabela’s were open at 8 a.m. on Thanksgiving morning. KMart opened at 6:00 in the morning, before the sun had even risen on the United States’ great home-grown holiday.

This year, by contrast, most, but not all, of the big chains will remain closed for business — forgoing the opportunity to have customers make the late local news by storming the aisles, but in the process allowing their employees to actually spend the holiday observing a holiday.

Over the past decade, Americans have been subject to a made-for-cable debate, emanating in large part from Washington, about a supposed war on Christmas. According to the dubious talking-head reasoning undergirding the reports about this jihad, people and businesses that swapped in the ecumenical greeting “happy holidays” in favor of “merry Christmas” represented a grave threat to the sacred Christian Day.

For a time, it seemed as if Thanksgiving was going to be a new front in the conflict. Having gotten ample culture-war mileage out of fury about holiday nomenclature, President Donald Trump late in his term briefly sounded the alarm about a related threat: a war on Thanksgiving, apparently led by progressive party-poopers who were sour about colonial history. Some of them didn’t even think it should be called Thanksgiving anymore! But, he assured fans, nobody was going to change the holiday’s name on his watch.

All the while, though, an actual war on Thanksgiving was well underway. And instead of it being about vocabulary, it was about work, money and dignity for millions of people.

If you didn’t notice this war, the chances are that you have an office job. In white-collar America, holidays still mostly mean something. But for retail workers, the pre-Covid expansion of Black Friday was just another step in a decadeslong desacralization of the entire holiday calendar. Occasions like Presidents Day and Memorial Day bit the dust decades ago. The Fourth of July stopped being a true day off more recently. It was inevitable that commerce would come for Thanksgiving eventually.

It’s not at all clear, by the way, that the threat is gone for good. A lot of the reasons why big stores are staying shut this Thanksgiving involve things most people hope will not be a permanent feature of American life: Inflation, worker shortages, the lingering fear of a jam-packed pre-Christmas sale turning into a super-spreader event. Will Thanksgiving shopping hours be back once those challenges are in the rear-view mirror? (Other shifts are more permanent, if not necessarily 100 percent positive: Shopping has continued to move online, for instance, changing the game for brick-and-mortar stores. And a lot of Black Friday deals started at the beginning of November this year.)

But this is not a lament about Christmas elevator music starting at Halloween or about allegedly tawdry holiday-season materialism or even about the fellow citizens who get a kick out of shopping as spectacle. I think it’d be better for us as a country if we didn’t spend as much time judging one another’s tastes and hobbies. Rather, it’s about power. If we’re going to have national holidays, they should be holidays for everyone — not just for people lucky enough to work at a place that doesn’t stay open on Thanksgiving, or doesn’t offer you a choice between 8 hours’ worth of pay and a chance to “enjoy annual traditions that have evolved into sacred rituals with our children and grandchildren,” as President Joe Biden put it in his 2021 Thanksgiving proclamation.

Of course, there are plenty of jobs that screw up holidays: If you work in a hospital or a hotel or a pharmacy or a firehouse (or, for that matter, a newsroom), you’ve probably had to work a Thanksgiving or three. Still, if you’re driving back home after dinner this year, take a look at where the lights are on. Does that McDonald’s really need to be open? How about that Sears?

Yes, it’s a free country, and the customer gets what the customer wants. But sometimes that’s not enough. At a time where we use holidays as an excuse to wage culture war, can we at least agree that they’re important enough to shut a fast-food restaurant?

Thanksgiving is our greatest holiday precisely because it’s egalitarian and ecumenical and endlessly customizable. You don’t have to buy gifts; it’s hard to make it fancy; it can be secular or sacred. At base, it’s about acknowledging that we’re all in this together, and we all got a little help along the way. What the cable-news culture warriors don’t get (and neither do the campus types who assert that the holiday is horrific because its origin story covers up a genocide) is that the meaning of the day is way more important than either loyally upholding or furiously destroying the fairy tale.

One way to honor that meaning: Make sure as many people as possible get their day off.

So this year, while you’re avoiding your politically toxic uncle and picking around your green beans, say a little thanks for the fact that you won’t get to go to the mall once the eating is done. And keep an eye out next year and the year after. The TV versions of the wars on Christmas and Thanksgiving are bunk, but the punch-clock one is all too real. And maybe the right side is winning. 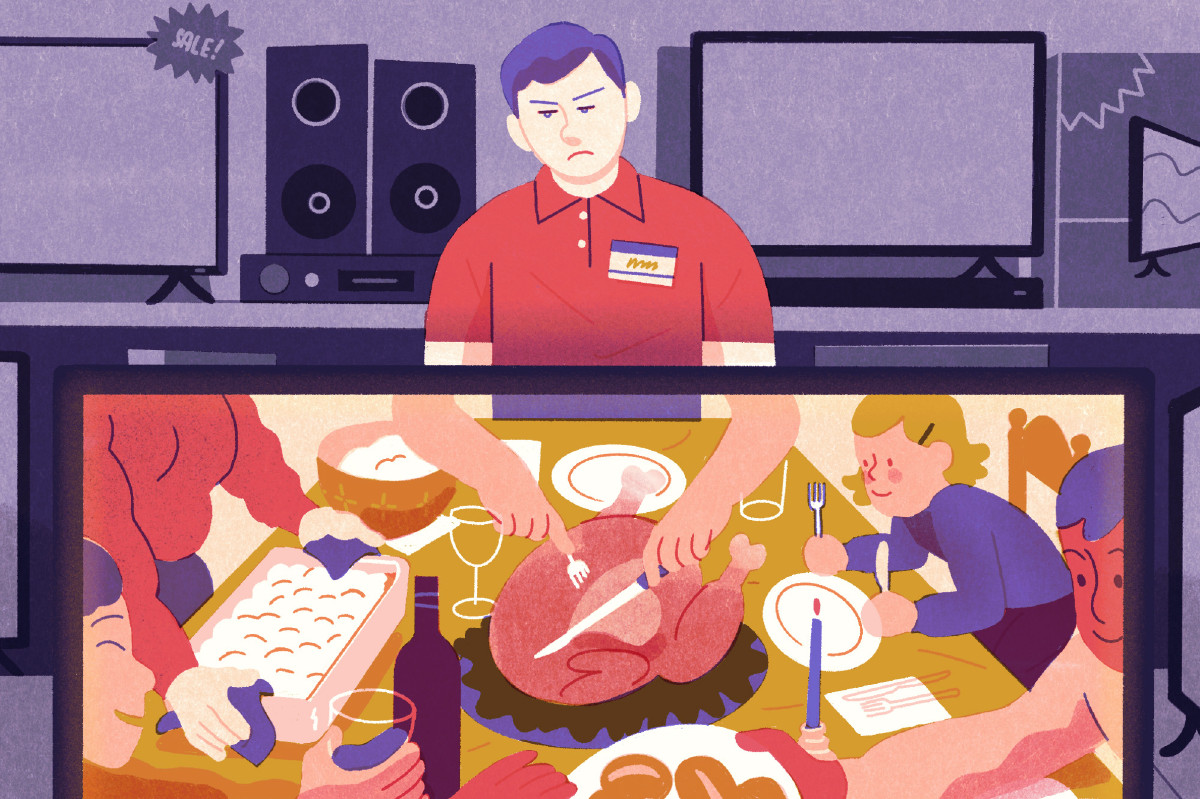 “Happy holidays” doesn’t hurt anyone, but robbing workers of time off does.

I think its good most places are closed on Thanksgiving
Reactions: beanerhawk, BanjoSaysWoof, EasyHawk and 9 others

I don't think so. The OP was typical Trad idiocy.
Reactions: billanole and seminoleed
H

This has been great to see this year and I hope it continues.
Reactions: Hendy hawk and hawksurprize

The Tradition said:
Cracker Barrel packs 'em in on Thanksgiving.
Click to expand...

One of the two days a year we are closed...but I was shocked how many places were open today as I made my way to Iowa...
You must log in or register to reply here.

Hy-Vee to be closed on Thanksgiving Day

Georgia Secretary of State Loses (for now) this attempt to rig the runoff election...